“When you think about it, there aren’t many things you can do for free while sitting in a chair that will transport you to another world. Reading fiction is one. Watching birds is another,” says author Steve Burrows.

And in his dazzling début, A Siege of Bitterns, he achieves the implausible by marrying these two passions in an ecological murder mystery. A Globe and Mail Best Book of 2014, A Siege of Bitterns captivated readers with its tightly constructed plot, its intriguing characters, and its linguistic playfulness.

“Birds and words: this is such a book for nerds! And I absolutely loved it,” says books blogger Kerry Clare. “Riveting from the first page to the final line,” adds the Globe and Mail.

Now Steve has followed up with A Pitying of Doves. Why would a killer ignore expensive jewellery and take a pair of turtledoves as the only bounty? This is only one of the questions that piques Chief Inspector Domenic Jejeune’s interest after a senior attaché with the Mexican Consulate is found murdered alongside the director of a local bird sanctuary.

Steve Burrows has pursued his birdwatching hobby on five continents, while researching articles on a wide range of environmental issues. He has a degree in English from York University and is a past editor of the Hong Kong Bird Watching Society Magazine. After travelling the world together, Steve and his family now live near Toronto.

Appearing in 29. A Bird’s Eye View on Murder, and 40. Writing Themed Mystery 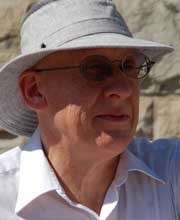