Al Purdy called Steve Heighton “one of the best writers of his generation; maybe the best.”

Steve is an eclectic writer, who has published in half a dozen genres, including numerous novels, essay collections, books of poetry, and short fiction. His most recent collection of poetry, The Waking Comes Late, released this Spring.

Steve began as a poet with Stalin’s Carnival, published in 1989, and has published five collections since. In 1995, The Ecstasy of Skeptics was nominated for the Governor General’s Award for Poetry. The Globe and Mail called it “Simply the most exciting book of poetry published this year.” The Montreal Gazette praised the poems as “vivid and resonant, alive with a kind of palpable energy.”

Steve continues to be, as George Elliott Clarke suggested early in this poet’s career, “a fusion of the classic and the hip.”

Steve was born in Toronto. A graduate of Queen’s University, he now lives with his wife and daughter in downtown Kingston near McBurney Park–a neighbourhood popularly known as the Writers’ Block. Steve served on the Kingston WritersFest Board for five years, and is an alumnus of the Festival. 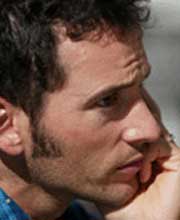