Susan Olding’s first book, Pathologies: A Life in Essays, won the Creative Nonfiction Collective’s Readers’ Choice Award, was longlisted for both the BC National Award for Non-fiction and Canada Also Reads, and appeared on Amazon.ca and 49th Shelf as one of 100 Canadian books to read in a lifetime.

Her essays, fiction, and poetry have appeared widely across North America, in journals such as Arc, Prairie Fire, The Malahat Review,and The New Quarterly, and have won several awards, including a National Magazine Award, the Edna Staebler Award for the Personal Essay, and the Judith Kitchen Prize in Creative Nonfiction.

This year Susan is back with Big Reader; essays. As a life-long bibliophile, Susan found she turned to the library to read her own life. From the dissolution and development of relationships, to the joys and heartaches of life’s progress, Susan writes with searing honesty. Fellow author and poet Lorna Crozier says “if these essays were glass bells and you struck them one by one… they would ring with the purest, clearest notes, each chapter in its singularity contributing to the gorgeous orchestral music that this book is… a remarkable thinker and wordsmith.”

Susan has several new projects on the go, including a collection of short fiction, Lonely Planet, completing archival research for a study on the failed friendship between Canadian poets Dorothy Livesay and Al Purdy, and “adding every now and again to a packet of poems that may, or may not, amount to a manuscript.”

Appearing in:
WS7. Two Paths to a Draft: Finding your material through form
17. Words as Solace: The Joy of Reading 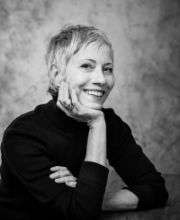