Tajja Isen is the editor-in-chief of Catapult magazine and the former digital editor for The Walrus. A voice actor for over two decades, you can hear Tajja’s voice under various guises and accents on animated shows such as Atomic Better, The Berenstain Bears, Super Why!, Go Dog Go, My Big Big Friend, and Jane and the Dragon.

In her debut collection of personal essays, Tajja Isen explores the absurdity in living in a world that has grown fluent in the language of social justice, yet does not always follow through. Through the book’s nine daring essays, Isen explores the quick fixes society uses to mask systemic problems. She interlaces cultural criticism with her own lived experience, and in doing so, creates a remarkable portrait of who we are and how we live today.

Sarah Hagi, writer at Gawker, describes Some of My Best Friends as “the rare essay collection that feels both modern and timeless. Hilarious and fresh, it’s the type of analysis that feels vital and made me go, ‘Finally!’ What a joy to read.” 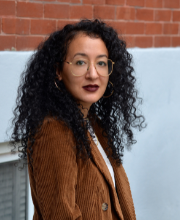