Therese Greenwood’s mystery stories have twice been shortlisted for the Arthur Ellis Award, Canada’s top mystery writing prize. Her stories have appeared in Ellery Queen Mystery Magazine, the Crime Writers of Canada’s Over the Edge anthology, as well as numerous books, magazines and newspapers. She is the co-editor of two mystery anthologies — Dead in the Water and Mystery Ink — as well as the Osprey Summer Mystery Festival, a series of short crime stories that ran for five years in almost two dozen newspapers across Ontario.

Therese is co-founder of the annual Scene of the Crime Festival (www.sceneofthecrime.ca) on Wolfe Island, where her family has lived since 1812. The local region forms the backdrop for her own historical crime fiction.

You can follow Therese on Twitter (www.twitter.com/wolfeislander), where she remarks on the craft of mystery writing, authors and literary events. 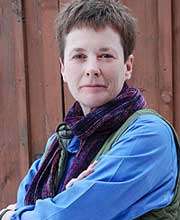