“I don’t know anyone who writes like Todd Colby,” says poet Brenda Coulter. “His voice is a singular stew of punk, language and American rage resulting in the strangest beauty. Like a side show performer at Coney Island, Colby swallows, chews, and metamorphoses the freaky and absurd into the miraculous.”

The author of four books, including Ripsnort and Tremble & Shine, Todd has also performed his poetry on PBS, MTV, and Much Music. He is editor of Heights of the Marvelous: A New York Anthology, and his work has appeared in numerous poetry anthologies, including Short Fuse: A World Anthology of Poetry, Revival: Spoken Word from Lollapalooza, and Aloud: Voices from the Nuyorican Poets Café.

As lyricist and vocalist for the now-legendary New York band Drunken Boat, he merged his literary sensibility with driving, off–kilter, indie rock, making “serious sport of language,” said the New York Times. Todd is also a frequent collaborator with visual artist David Lantow; their books and paintings can be seen in the Brooklyn Museum of Art and the Museum of Modern Art special collection libraries.

Todd serves on the Board of Directors for The Poetry Project, where he has also taught several poetry workshops. He lives in Brooklyn, New York. 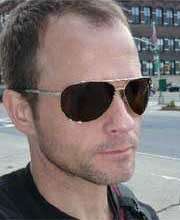