Then, at the age of fifty, somewhat dismayed by his lack of commercial success, Trevor decided to try something different. He would write a police thriller under a pen name. And so was born the mystery writer John Farrow, and his series featuring the moody loner Sergeant–Detective Emile Cinq–Mars, including City of Ice, Ice Lake, and the recently released River City.

Set in Montreal and written with gritty authenticity fed by Trevor’s second careers as a cab driver and bartender, not only have the books become hugely popular in the highly competitive crime fiction market, but they have garnered excellent reviews as well. Publishers Weekly described Cinq–Mars as “a Dirty Harry of French and Indian extraction who tracks down bad guys with brute determnation and Holmesian logic.” “A new crime fiction star is born,” said Booklist.

Also a playwright, Trevor Ferguson has parlayed River City into a one–man dramatic reading accompanied by the virtuoso flutes and whistles of David Gossage. Set against the backdrop of 450 years of Montreal history, this is a story of hockey, hoodlums, corruption, and murder. 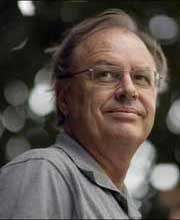 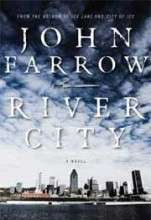