Journalist and musician Wab Kinew is not afraid to tackle tough topics, and seeks to engage Canadians at large in improving the lives of indigenous people.

His eagerly awaited first book, a memoir, The Reason You Walk, provides an inspiring vision for family and cross-cultural reconciliation, and for a wider conversation about the future of aboriginal peoples.

When his father was given a diagnosis of terminal cancer, Wab decided to spend a year reconnecting with the accomplished but distant aboriginal man who’d raised him. The book chronicles painful moments in the past and celebrates renewed hopes and dreams for the future.

“My dad was terminally ill,” Wab says. “I wanted to invest in that relationship, so that we didn’t leave anything on the table, or regret never having the time to put it on a right footing.” He helped his father through his personal healing journey, which included making peace with the Christian tradition that both shaped and scarred him.

As well as The Reason You Walk, Wab has a children’s book to be released this fall about notable figures in First Nations history—from War of 1812 hero Tecumseh to former Olympic water polo gold medalist Waneek Horn-Miller.

A rapper turned broadcast journalist, Wab was named by Postmedia News as one of “Nine Aboriginal movers and shakers you should know.” He is the Associate Vice-President for Indigenous Relations at The University of Winnipeg and a correspondent with Al-jazeera America. After successfully defending Joseph Boyden’s The Orenda on CBC’s Canada Reads literary competition, he was named this year’s host. His hip-hop music and journalism projects have won numerous awards.
Wab lives in Winnipeg, Manitoba with his family.

Appearing in 52. Walking the Path of Hope: Memoir 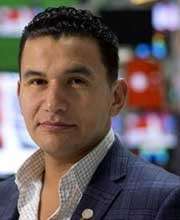