“The best advice I ever got was to be proud of who I am and to always be true to myself,” says Anishinaabe author Waubgeshig Rice. “It’s advice I got early on from my parents…I think it’s a simple, effective mantra that can keep us all grounded in this wildly changing world.”

Waub hails from Wasauksing First Nation, a community on the shores of Georgian Bay. A respected journalist, he began his career as a 17-year-old exchange student in northern Germany where he wrote about his experiences as an Anishinaabe. Waub has worked extensively for the CBC. He is a recipient of the Anishinabek Nation’s Debwewin Citation for Excellence in First Nation Storytelling.

His debut publication, Midnight Sweatlodge, a short story collection, was followed by Legacy, which the late author Richard Wagamese, praised for its “bold, envisioning storytelling…. With Legacy, Waubgeshig Rice places himself squarely at the forefront of the next wave of Native authors.”

Waub says his most recent novel, the post-apocalyptic Moon of the Crusted Snow (from the Anishinaabemowin term Onaabenii Giizis, which can refer to late March), is, “much more than a story about the apocalypse and its fallout. It’s about resilience, self-discovery, and renewal… how one community’s collapse could be another community’s new beginning.” 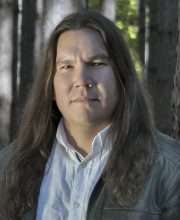