Waubgeshig Rice grew up in Wasauksing, an Anishinaabe community on the shores of Georgian Bay. He developed a strong passion for storytelling as a child while learning about being Anishinaabe. The stories his elders shared and his own unique experiences growing up in his community inspired him to write creatively. Some of the stories he wrote as a teenager eventually became part of his debut short story collection Midnight Sweatlodge.

His most recent work, a novel, Legacy, deals with violence against a young Indigenous woman and its lingering after-shocks on an Anishnaabe family in Ontario. “I think we can all agree that indigenous families in this country sadly deal with tragedy to a greater degree than non-indigenous families,” Waub says. He continues, however, that “what really struck me was the resolve to try to overcome the tragedies, but at the same time honour the people that they lost in their lives.” Author Richard Wagamese praised the novel for its “bold, envisioning storytelling”, and stated that “with Legacy, Waubgeshig Rice places himself squarely at the forefront of the next wave of Native authors… A hands down pleasure to read.”

Waub is a recipient of the Anishinabek Nation’s Debwewin Citation for Excellence in First Nation Storytelling. He is also a respected journalist, with a career that began when he was a 17-year-old exchange student in northern Germany, writing about being Anishinaabe in a European country, for newspapers back in Canada. He graduated from Ryerson University’s journalism program in 2002, and has worked in a variety of media across Canada since. Along with reporting the news, he has produced television and radio documentaries and features for the public broadcaster. He started working for CBC in Winnipeg in 2006 and currently works as a video journalist for CBC News Ottawa. Waub lives in Ottawa. 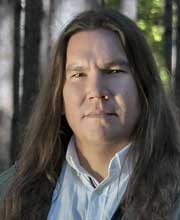