Yvette Christiansë is a South–African born poet, novelist, and scholar. Although she is now settled in New York City where she teaches African American and postcolonial literatures at Fordham University, her work often takes on issues of transnational migration and diaspora. In doing so, it draws from her own life as a South African and from the past of her family.

Her first solo poetry collection, Castaway, evoked past voices of the island of St. Helena, a port of call for the slave trade in the eighteenth and nineteenth centuries.

Her debut novel, Unconfessed, similarly explores the realities of the transatlantic slave trade as experienced by those forced into migration and manual servitude. This novel is written through the voice of Sila van den Kaap, a slave convicted of murder, who is first seen in her prison cell in the Dutch settlement of Cape Town. There, locked in a mental state somewhere between sanity and madness, Sila tells of her imprisonment, of the crime that led to it and of the hard life of servitude she knew in her old life as a slave.

Library Journal calls Unconfessed “Impossible to put down,” and says it “deserves a place beside such classics as Toni Morrison’s Beloved and Edward P. Jones’ The Known World.” Kirkus Review has called it “a gorgeous, devastating song of freedom.”

Unconfessed was a finalist for the Hemingway/PEN Prize for first fiction and a recipient of a 2007 ForeWord Magazine BEA Award. It was also shortlisted for the University of Johannesburg Prize and the International IMPAC Dublin Literary Award in 2008.

Yvette’s most recent poetry collection is Imprendehora, which follows the tribulations of slaves “liberated” after abolition and sent to various colonies. 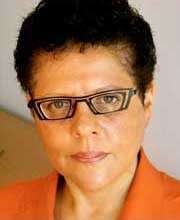