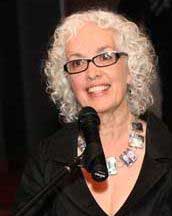 As Merilyn Simonds takes her leave of Kingston WritersFest after five years as Artistic Director and one year as Fund Development Manager, the Festival is moving ahead with a legacy initiative in her name. The Merilyn Simonds Protégé Project will reflect Simonds’ passion for the mentoring of young writers, in particular high-school students who confront challenging circumstances that might limit their creative opportunities and aspirations. Announced from the stage at Kingston WritersFest’s International Marquee event in late September, it will link Simonds with the Festival long after her current position in fund development ends on December 15, 2014.

Each year, the Merilyn Simonds Protégé Project will match two Kingston-area students with two local professional writers for a 4-month mentoring experience, primarily online but also in person, that allows the students to develop and hone a piece of original writing. Details of the application process will be available in spring 2015 and the first successful student protégés will be announced in January 2016. Their completed works will be showcased at Kingston WritersFest 2016.

Current KWF Artistic Director Barbara Bell describes the experience as “potentially life-changing – for both the student and the mentor.” Kingston WritersFest already works with Kingston and area high schools for its successful Festival Field Trips, which last year brought some 800 students to the Festival’s downtown Holiday Inn location for specially-programmed onstage presentations and TeensWrite Master Classes. “The Protégé Project is an extension of our commitment to young writers and a way of honouring Merilyn’s outstanding contribution to the literary life of the city and the country.”

“In the often overwhelming turmoil that is adolescence, writing gives young people a voice; the confidence that their story is important, their view of the world valid and vital,” says Merilyn Simonds. “We’ve seen again and again how story has brought joy and purpose to those struggling in the margins of adulthood. I am deeply touched that this will become a permanent part of the Festival’s outreach.”

Merilyn Simonds is an internationally renowned writer of creative nonfiction, novels and short fiction, and works of memoir, travel, history and essays. In 2009, she became Artistic Director of Kingston WritersFest, and under her guidance the annual readers and writers festival grew to be one of the top literary events in the country, attracting audiences of up to 8000 and scores of authors from across Canada and around the world. In 2014 she stepped down from the AD’s position to serve as the Festival’s Fund Development Manager. Now she’s made the decision to return to the writing and teaching that are her first loves.

“We thank Merilyn sincerely for her inspiring leadership and exceptional skills. She has given writers in every genre a welcoming stage here in Kingston, and its readers countless memorable, up-close encounters with their favourite authors,” says Barbara Bell. “As a literary impresario, she is among the best.”

For further information about the Merilyn Simonds Protégé Project, or to explore partnership with us on this worthy outreach initiative, please contact: info@kingstonwritersfest.ca