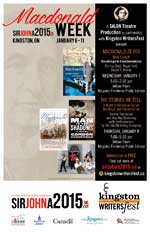 SALON Theatre Productions, in partnership with Kingston WritersFest, presents two literary evenings at the Central Branch of the Kingston Frontenac Public Library, 130 Johnson Street. The two events are part of the SirJohnA2015’s Macdonald Week programming January 6-11 in Kingston ON.

January 7, 5:00-7:00 pm, join SALON Theatre and Kingston WritersFest for the book launch of “Macdonald at 200”. This collection of 15 essays from leading academics and historians shedding new light on aspects of Macdonald’s life and policy. The wine & cheese event will feature readings by co-editor’s Patrice Dutil, Roger Hall, and contributor David A. Wilson, with conversation to follow.

The Stories We Tell: A Night of Historical Fiction

January 8, 7:00-9:00 pm, SALON Theatre and Kingston WritersFest are proud to welcome authors Gordon Henderson and Roy MacSkimming with performances by the SALON Acting Company. This theatrical and literary night examines writing about and performing the genre of historical fiction: where fact meets artistic expression and fiction, when artistic liberties are taken, and more. Gordon Henderson will present excerpts from his newly released novel “Man In The Shadows” and Roy MacSkimming will give a preview reading from his soon to be released book “The Secret History of Sir John A.”

Macdonald Week, January 6-11, 2015 launches a year of events across the country marking the life and legacy of Sir John A, which are aimed at sparking conversation around our national identity and Canada’s first Prime Minister, warts and all. Join the conversation and get full details at www.sirjohna2015.ca.