Did you know that Walt Whitman visited Toronto in 1880? The author of the seminal Leaves of Grass wrote about the city in his diary, describing it as “a lively dashing place.” From poets to lecturers to authors of famous novels, early Canada had quite a number of distinguished guests.

Oliver Twist author Charles Dickens, in his travels through Canada, made stops in Niagara Falls, Toronto, Montreal, and Kingston. Although he was reportedly enthralled by the Falls, he was considerably less impressed by Kingston (then Canada’s seat of government). He described it as “a very poor town” and, despite apparently enjoying tours of Fort Henry and the Kingston Penitentiary, seemed to much prefer Montreal, where he where he took to the stage alongside a platoon of Garrison Amateurs at the 1500-seat Queen’s Theatre.

Oscar Wilde, author of The Picture of Dorian Gray and subject of the most infamous trial of the Victorian era, made a tour of 15 Canadian cities in 1882 as part of a series of lectures on aestheticism. True to the movement’s emphasis on beauty and his own colourful character, Wilde purportedly toured the “colonies” wearing elaborate clothes of velvet and lace, including a comic opera cape. Despite his elaborate appearance, his lectures (like his writing) were serious meditations on art, life, and beauty. 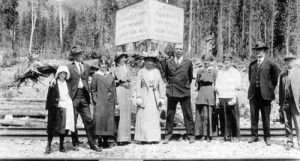 In 1914, Sir Arthur Conan Doyle (most known for being the creator of Sherlock Holmes) was invited by the Canadian government to travel from Montreal to Jasper National Park on the newly-minted Grand Trunk Pacific Railway. As he travelled through Montreal, Edmonton, Winnipeg and Ottawa, Conan Doyle spoke on “The Future of Canadian Literature.” In 1915, Conan Doyle wrote a poem called “The Athabasca Trail” about his time in Alberta. In it, he wrote that “The mighty voice of Canada will ever call to me.” 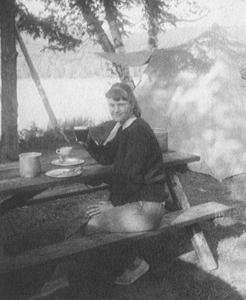 Sylvia Plath, the celebrated poet and author of The Bell Jar, travelled across Canada and the United States with her husband, Ted Hughes, in the summer of 1959. Although it wasn’t a public tour in the style of Wilde or Conan Doyle, Plath seems to have spent most of her time in Canada camping. Like Conan Doyle, however, Canada inspired some poetry in Plath. Her poem, “Two Campers in Cloud Country (Rock Lake, Canada),” describes the landscape as “the last frontier of the big, brash spirit.”

From the Victorian era to the 20th Century, it’s evident that these authors were constantly aware of the differences between Canada and their own countries. These differences come through in their writing: through poetry, letters, and diaries, depicting Canada in equal turns as wild, bustling, bold, and full of raw potential.